It’s that most wonderful time of the year, full of food and films for all to enjoy, and here at ORWAV we thought we’d do our bit to get you in the Christmas spirit with a gift guide for all your festive needs. Part Two features our favourites for the action hero in your life as well as the best books and films to make you laugh this Christmas.

Or, you can head here to see our selections for the Arthouse Addict and Sci-Fi Superstar.

Few can deny that Spielberg is a master of his generation and of filmmaking in general, and Universal’s recent 8-film Director’s Collection serves as both an acknowledgement and a refutation of that fact. The collection includes the following films spanning the first twenty-five or so years of the director’s career: Duel, The Sugarland Express, Jaws, 1941, E.T., Always, Jurassic Park, and The Lost World.

The set is something of a mixed bag. If one required a testament to Spielberg’s genius they might be inclined towards Jaws, E.T., or Jurassic Park, films of such vision that they are rightly remembered among the greatest of all time. Otherwise, if one wanted to repudiate that claim, they might point towards 1941, Always, or The Lost World. While it is nice to see Duel and Sugarland Express, two of the director’s half-remembered greats, one could bemoan the absence of Schindler’s List, a Universal picture that would have helped tip the masterpiece-to-misfire ratio. Even if the discs are a little difficult to remove, the set is lovingly put together and would make for a perfect Christmas gift for a seasoned film fan interested in an eclectic introduction to Spielberg’s undoubtedly brilliant career.

If you buy this for an action fan and they don’t enjoy it, then they’re not an action fan. Widely touted as the Godfather II of action films, The Raid 2 builds on the breakout success of the original and expands the dramatic scope, proving that director Gareth Evans is no one-trick pony.

The plot grows a little confusing and slow at times, but this is more than made up for by a clutch of the most memorable fight scenes you’ll ever see. Tendons rip and bones break with zero mercy as relentless star Iko Uwais beats seven shades of silat out of the Indonesian underworld. Brutal, breathtaking and unforgettable.

Where generations of students have blu-tacked Che Guevara to their walls, ironically or otherwise, you can instead hail Caesar – the greatest revolutionary ape the big screen has ever seen. With this discreet print, stand out amongst your housemates and start debating how well the Che/Caesar comparison holds up.

Christmas is a time for spreading joy and seeing loved ones, but it’s also a religious holiday, so it makes perfect sense that Ridley Scott has released his new Biblebuster in time for your festive viewing. With Exodus: Gods and Kings, he tells the familiar story of Moses from a realist point of view whilst never being foolish enough to scrimp on the stunning spectacle of the Ten Plagues.

Bale is soulful and believable in his transformation from adopted Egyptian to devout Israelite and Edgerton is an excellent foil as egomaniac Pharaoh Ramses. Exodus is more than a hack-and-slash action blockbuster – there’s strong drama on display too, adding depth to these most familiar of characters. 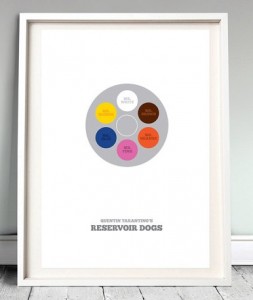 Quentin Tarantino’s latest masterpieces have been languorous epics, soaked in blood and pierced with bullets and his debut film isn’t much different. Nasty, brutish and short, Reservoir Dogs packs just as much punch into a more straightforward package, with the action mostly confined to one location. This minimalist poster takes the same barebones approach as the film, delivering six colour-coded characters, loaded like bullets in an ominous array.

Kings and Queens of Comedy

With tongues firmly pressed into knowing cheeks, 21 Jump Street was an unexpected triumph – the buddy cop comedy to top them all. Inevitably there would be a sequel, inevitably it would graduate high school for college, and inevitably it would disappoint. Right, right, wrong! By deliberately taking all the negatives of the first two assumptions and using them to their advantage, Lord and Miller avoided sequelitis, instead creating a s-equal with humour and heart. Sit down and watch this box-set back-to-back without feelings of dejected deja-vu – how many other series, especially comedies, can offer that?

Sharp, funny, poignant, and nostalgic, this collection of the late Ephron’s best works is a treasure trove of something-for-everyone. Her prolific career is superbly laid out in this 400-page anthology covering her journalism, advocacy, blogging, plays, recipes, and, of course, her classic screenplay When Harry Met Sally; it’s easy to tell the volume was edited by Ephron’s friend Robert Gottlieb, and Gottlieb’s brief introduction is a look behind the curtain that shapes how you read the works themselves.

A glorious reminder of everything Ephron stood for, from her middle class New York feminism to the unique quality of her perspective on love, this is a book that can be shared by young, old, male and female. In short, anyone you might wish to buy for this Christmas. 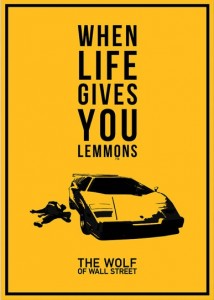 When life gives you lemons…best to check what kind they are. This striking poster from CEED Designs combines strong puns and an unmistakeable silhouette to immortalise The Wolf of Wall Street’s most famous scene. Leonardo DiCaprio inhabits the title role with a formidable charisma, but this, his lowest of moments is what truly stays in the memory. An iconic piece of physical comedy transformed into a work of art. 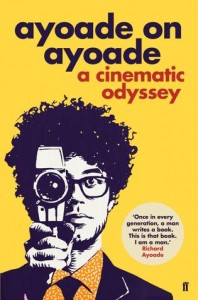 If his recent appearance on the Channel 4 News with serial cinematic interview stooge Krishnan Guru-Murphy is anything to go by, Richard Ayoade hates interviews. If his new book, Ayoade on Ayoade is anything to go by, he is more fascinated by the demands and tropes of the format than full of hatred for its existence. Opening this book to find a series of scripted vignettes where Ayoade literally interrogates himself makes perfect sense coming from the man who just directed The Double. Equally as predictable is the familiar self-deprecating humour at once skewering his own cinematic and literary pretensions and the entire world of film from Speed 2 to Terrence Malick. Hilarious and insightful, this is the perfect gift for film snobs comfortable enough with that fact to laugh at themselves. 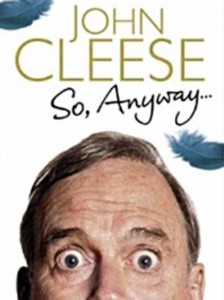 John Cleese’s first memoir is full of the dry wit and silly humour you would expect from a former Python and the man responsible for Basil Fawlty. Though it is somewhat tinged with sadness; here is a man trying to make sense of his troubled childhood, especially his relationship with his mother Muriel, which Cleese describes as ‘problematic.’ His constant references to psychologists and their different theories further suggest an anxious mind searching for answers. This is more than just a neat collection of funny anecdotes for the discerning Monty Python fan. Indeed, the book ends in 1969 just as Monty Python’s Flying Circus begins to kick off, so there are none of those anecdotes.

This is a book for anyone who wants to know how and why Cleese became, and remains, funny. We cover his early days from his very fist memory through his time at school and then on to Cambridge and his first forays into comedy. Some might call it slow and without any of the interesting things we want to read about Cleese, but there’s a lot here in 404 pages providing a fascinating insight into the development of one of our greatest comedy minds.

Yet Poehler’s prose, as well as witty, is often humble, and displays a frequent and charming self-conscious cynicism towards both the publishing industry and the more irritating tendencies of run-of-the-mill celebrity autobiographies. As well as the expected commentary on Poehler’s early improv days, SNL career, creatively fruitful friendship with “Tina” (Fey, of course) and work in Parks and Recreation, Yes Please packs in some meatier topics and plenty of surprises.

Despite freely admitting her struggle to complete the book, some of Poehler’s more sober passages are also her most impressive, heartily succeeding in conveying her admiration for friends and colleagues, and the power of maternal love. All this makes Poehler great company in print as well as on screen, and Yes Please an ideal gift for hardcore fans of her work, or those who simply enjoy intelligent pop-feminism.