It’s that most wonderful time of the year, full of food and films for all to enjoy, and here at ORWAV we thought we’d do our bit to get you in the Christmas spirit with a gift guide for all your festive needs. Part three features the best gifts for older film fans and fans of classic film, as well as presents to delight kids or the young at heart.

Or, you can head here to see our selections for the Action Hero and Kings and Queens of Comedy.

Or here for the Arthouse Addict and Sci-Fi Superstar.

Bursting into last year’s Oscar race with four nominations, Philomena tells one of the most moving stories of recent times, that of the title character, Philomena Lee. Forced to surrender her child for adoption while living in a convent, what follows is a film bursting with the best and worst of humanity. Blind faith vs forgiveness, cruelty vs kindness, and at the heart of it all a devoted and revelatory performance from Dame Judi Dench who has perhaps never been better. Dench and Coogan’s on-screen friendship is beautifully written and realised, delivering plenty of laughs and tears.

Ten years after Judi Dench’s Scenes From My Life was published, a lot has happened to the actress. Further duties as ‘M’ in the James Bond canon, her first Hollywood movie, J. Edgar, The Best Exotic  Marigold Hotel franchise and her highly-acclaimed turn in last year’s Philomena ensure that Dame Judi is as in demand as ever, leading to this updated and expanded collection of photographs and stories from both her personal and professional life.

A pleasingly candid and casual set-up allows the reader to skim through the glossy pages of Dame Judi’s career, uncovering her rise to the highest echelons of the theatrical profession, as well as her later, very successful, forays into television and film – despite the producer of her very first screen test in the 1950s claiming, “Miss Dench you have every single thing wrong with your face”.

A must for any fans of the actress, and also a safe bet for anyone interested in the development of the British acting establishment – Dame Judi’s worked with everyone, from the RSC to the National Theatre, and Clint Eastwood to Dames Joan Plowright and Maggie Smith, and Sirs Ian McKellen and Daniel Day-Lewis.

This book, showcasing never-before-seen photographs from Cecil B. DeMille’s personal archive, and commentary from the legendary director’s granddaughter alongside much of Hollywood’s great and good, is of suitably epic proportion. DeMille, who effectively became the founder of Hollywood when he chose it for the location of his 1914 feature-length first picture The Squaw Man, was never a critic’s darling but the first master of the crowd-pleasing blockbuster.

His hits included Cleopatra, Samson and Delilah, The Greatest Show on Earth, and two successful versions of The Ten Commandments, making him the pioneer of the ‘sword and sandal epic’ and (still) Hollywood’s most commercially successful  director. As the first man in the industry to recognise the importance of art in the cinematic process, there are plenty of production sketches and stills to peruse – indeed, he was known to take almost as long over getting the perfect publicity image as he would the perfect scene. An ideal present for any fan of Hollywood history, art in cinema, film production or glossy photos!

World War II, that most evocative of period settings, is brought to life with a supernatural twist in this compelling adaptation of Markus Zusak’s 2005 novel of the same name. Set in civilian Germany during the war rather than the more familiar Allied countries, there is an uncanny edge to watching how these ordinary people react to life under the greatest evil imaginable. Sophie Nélisse is terrific as the adopted innocent and book thief of the title, with strong support from Geoffrey Rush and Emily Watson. 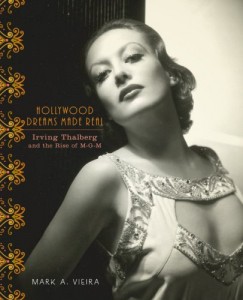 This book explores the beginnings of MGM, the studio that would rule the Golden Age of Hollywood with “more stars than there are in the sky”, and the life of the man who arguably created the role of producer, Irving Thalberg. Thalberg, the “Boy Wonder” of Hollywood, was managing Universal Pictures by the age of 21 and a co-founder of MGM in 1924. Although he never took any on-screen credit, he produced around 90 features and inspired an honorary Oscar to be awarded in his memory to exceptional creative producers. Responsible for the careers of stars like Greta Garbo, Joan Crawford, Clark Gable and Lon Chaney, Thalberg also produced the first horror picture, rescued 1925’s Ben-Hur from production hell, made Johnny Weissmuller Tarzan, and oversaw the first ‘star vehicle’ with 1932’s Grand Hotel. A great gift for film buffs or anyone interested in the studio system of early Hollywood this Christmas, as MGM’s ninetieth anniversary celebrations draw to a close.

Frozen took the world by storm this summer and ‘Let It Go’ topped the charts as a phenomenal ballad about being who you want to be, about being on the outside but building your own wonderful life, but at the same time about opening up to the people around you who can help you through. A beautiful and hilarious film and an interesting metaphor for mental illness and disability, Elsa and Anna’s story of redemption and self-discovery makes a perfect Christmas gift, especially when your family and friends are belting out the songs at the top of their lungs.

Including extras like the “Breaking the Ice” featurette and the original theatrical short “Get a Horse”, the inclusion of the lyrics and a dynamic 3D bouncing snowflake embellish a wonderful film. A step above your average DVD edition and perfect for young children and slightly fanatical adults, it’s a gift that makes a solo obsession a group event.

Any Frozen merchandise will be a crowd-pleaser for children of any (and all) ages this Christmas. Olaf the loveable snowman is a break-out star from the film, and here you can have him dancing and singing in your house throughout the whole holiday period (and beyond!). Official Disney merchandise tends to give buyers higher quality toys than cheaper, supermarket-produced lines, and this Olaf displays a real likeness.

A fabric-covered ‘moving’ toy, Olaf speaks (clearly) four phrases whilst bobbing around. Crucially, Olaf also sings the opening lines of his big number, ‘In Summer’, and comes complete with boater and sunglasses. Sold.

How to Train Your Dragon 2 sees a return of Hiccup and Toothless as they use their combined skills to map the lands surrounding their home. They discover both friends and foes and have to defend the way of life they established in the first film. The film is a fantastic sequel; it is well layered for equal enjoyment for adults and children, and the animation is delightful. It does have some emotional moments, but combined with its exploration of the strength of familial love, it is a perfect gift for Christmas, and would make a great family activity while Christmas dinner is being digested.

As a time of joy and goodwill, we can’t think of any better way to spread the love this Christmas than with The LEGO Movie. What could have easily been a cynical and soulless cash-grab surprised us all by becoming the most enjoyable and just-plain-fun film of the year (this side of 22 Jump Street). With quotes that last long in the memory (“SPACESHIP!”), a bright and beautiful visual style, and a wicked sense of humour, The LEGO Movie surpassed all expectations by showing us a cast having the time of their lives and the true power of imagination.

“Everything is Awesome”, proclaims this T-shirt. Is everything really awesome? Is it even O.K? These are the kinds of existential questions raised by this simple garment. Evade such serious issues and confirm that everything is indeed awesome by flaunting your passion for the number one animated hit of the year.