It’s that most wonderful time of the year, full of food and films for all to enjoy, and here at ORWAV we thought we’d do our bit to get you in the Christmas spirit with a gift guide for all your festive needs. Part One features the best gifts for arthouse addicts and any friends and family with their eyes on the skies.

Or, you can head here to see our selections for the Action Hero and Kings and Queens of Comedy.

Or even our Silver Screeners and Family Friendly Film gift guide.

Despite being one of the finest films to hit cinemas this year, Inside Llewyn Davis was largely overlooked during the award season. Though it featured a stand out performance from the now omnipresent Oscar Isaac, the most memorable aspect of the Coen Brothers’ film was the music. It was crafted by revered producer T Bone Burnett and features vocals by Justin Timberlake, Carey Mulligan and of course Oscar Isaac. This vinyl version will transport listeners back to the New York folk scene of the early 60s, which is so vividly depicted in the film.

Little White Lies have forever been asking people what they love about movies since their founding back in 2005. With their first full volume of answers to this now inaugural question, Little White Lies brings to light a full and comprehensive list of the passion behind the movies, and the people who make them.

Fully illustrated with Little White Lies’ signature pop-art perfection, What I Love About Movies makes an easy companion to ‘the best designed film magazine on the shelf’. Though certainly beautiful to look at, the book’s accompanied contributors offer more than enough between the lines. Featuring statements from Quentin Tarantino, Wes Anderson, Michael Fassbender, Carey Mulligan and many more, What I Love About Movies brings unique and personal insight to the drive behind some of cinema’s greatest artists.

The stunning visuals don’t end there, with Little White Lies’ 50th issue bringing together 50 of the world’s finest illustrators to graphically reinterpret 50 of cinema’s most iconic pieces from the last 50 years. One of the most prominent and visually striking designs from the set features 2013’s Gravity, as illustrated by Gabz – though other examples include the likes of Moonrise Kingdom, Requiem for a Dream and The Tree of Life.

Courtesy of: The State Lines

Have you ever wanted to be as effortlessly cool as Bill Murray? Of course you have, you’re a person who exists in the world. Unfortunately, however, you’ll never be a patch on such a man, so tough luck. Luckily, you can piggyback on his cool just a tad with a brilliant replica prop from Wes Anderson’s The Grand Budapest Hotel. Yes, you can now own a lovely little badge or magnet of the eponymous emblem of the Society of the Crossed Keys, the top secret and highly professional organisation of hotel concierges. Equally impressive is the rest of The State Lines range, full of cult and Anderson-inspired accessories to bring a smile to your face. So go on, get out there and help some wanted criminals evade the law.

Alongside The LEGO Movie, it would be fair to call James Gunn’s Guardians of the Galaxy one of the biggest surprises of 2014. As Marvel’s second round goes, Thor: The Dark World was met with murmurs of indifference, while The Winter Soldier was deemed a welcome improvement upon the star-spangled Cap’s first outing.

In the months since its release, Guardians may have lost a little of its initial shine – although it remains a firm contender for the best Star Wars movie never made – but no one can deny the energy, charm, and flair of this decidedly high-risk venture. Just as the superhero genre seemed to be at risk of saturating, Gunn & Co. arrived to give Marvel a laugh-filled adrenaline shot in the arm as Chris Pratt confirms his leading-man credentials. Marvel rolled the dice and this time it paid off; Roll on Avengers 2 – in Marvel, we trust. 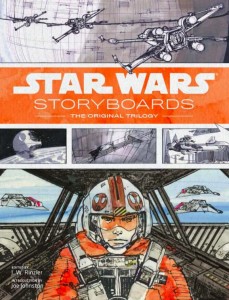 As a privileged glimpse into Star Wars’ (very) early days, this book has no rival. Filled with thousands of hand-drawn images, it digs even further into the minutiae, not just of Star Wars, but of filmmaking and art direction in general; the storyboards have been loving reconstructed by Lucasfilm Executive Editor J.W.Rinzler and are accompanied by commentary from the artists involved, including Joe Johnson (now a director responsible for Jumanji and The First Avenger) and Nilo Rodis-Jamero. A superb quality chunky hardback with lush photo-paper pages, this is a great Christmas gift for any film fan, a must for any Star Wars fan, and a necessity for budding film artistes.

Subtle enough to avoid being spoiler-filled, fans of Interstellar will appreciate the incorporation of so many of the film’s design inspirations and plot considerations into this striking image. The influence of 2001 is as apparent here as it is in Nolan’s masterpiece – is there something monolithic about that bookcase? 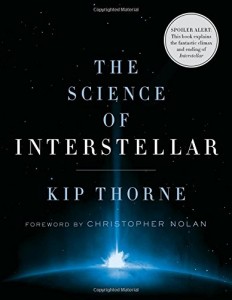 Whether you felt convinced, confused or conned by the science in Interstellar, there is so much you will get out of The Science of Interstellar.

Kip Thorne, the brains behind the blockbuster, is an engaging writer with fascinating ideas in this simultaneous explanation-behind and making-of. Roughly following the cinematic narrative (spoilers abound), Thorne takes the reader on a journey through space and time, detailing the vessels you travel in, the sights you see and the forces you feel. And, as Interstellar is not just about space, this book is not bound to astrophysics – biology, geography, even the mysterious workings of Hollywood, all get their moment.

But, do not go gentle into this good book. It’s far from being a textbook of black-hole density, but it’s also not a piece of ‘popular science’ where you can expect to understand every detail. Still, just as with Interstellar, this doesn’t make the book any less interesting.

Stanley Kubrick’s 2001: A Space Odyssey (1968) is a must-see film for a whole host of reasons. Thanks to the BFI’s re-issue of the film as part of the Sci-Fi: Days of Fear and Wonder season (an apt summary of2001’s narrative trajectory, if such a thing is possible), you can give any seasoned sci-fi fan or uninitiated Odyssean the chance to see this modern masterpiece on the big screen. There’s no better place to appreciate the stunning vistas of the film’s opening act, “The Dawn of Man”, its massively influential space exteriors, and its mind-bending finale.

Even in today’s cinematic landscape, often dominated by effects-heavy and technically ground-breaking films, 2001, a game-changer of its own era, still impresses with its elegant effects nearly 50 years on. In the pre-digital age in which Kubrick and writer Arthur C. Clarke crafted 2001, effects such as simulating a lack of gravity required a different form of creativity than that demanded by the green screens of today. 2001 is simultaneously a technical marvel, a meticulously created artwork, and, thanks to visuals based on photographs supplied by the University of Manchester’s Department of Astronomy, even a historical record of early space discovery.

Go on, buy two tickets so you can see for yourself and give a truly awe-inspiring gift.

2001: A Space Odyssey is playing in cinemas around the country until early 2015. For more information see www.bfi.org.uk/whats-on/bfi-film-releases/2001-space-odyssey.

If you or a loved one went to see Under The Skin in the cinema and immediately wanted to watch it again, or had absolutely no idea what was going on so had to watch it again, then buying the DVD or Blu-Ray (for those of you living in the future) is a must.

A chilling and thought-provoking film, Under the Skin features a transformative performance from Scarlett Johansson as an alien stranded in Scotland and bold, experimental direction from Jonathan Glazer. And let it not be said that this is a bogus Christmas recommendation; the final scene of the film is set in a glorious Christmas-card worthy Scottish snowscape, as wintry as it comes. Though Christmas cheer isn’t exactly what it brings to the table…