In 1994, Disney seemed like it could do no wrong. The release of The Little Mermaid in ’89 had kick-started the “Disney Renaissance” and the studio was riding high on the success of a string of musical films that had raked in cash and brought the company back to the levels of ubiquity it experienced in the ’30s and ’60s. Fresh from co-helming The Lion King, director Roger Allers pitched the next musical sensation: Kingdom of the Sun, an Incan odyssey based on The Prince and the Pauper with original songs penned by Sting. Seemingly a recipe for success… so what went wrong?

Let’s be clear: The Emperor’s New Groove, which turns 20 this week, is a good film. The lush visuals combined with its snide playfulness sowed the seeds of every noughties kid’s sense of humour and there are some truly stellar cast performances. It was the first Disney film to look down the barrel of the lens and wink at the audience, sending up the tropes that even every Disney-phile was sick of by 2000. It’s such a light and breezy film that it’s shocking to think the plug was almost pulled on multiple occasions and Disney creatives were pushed to the brink of collapse. 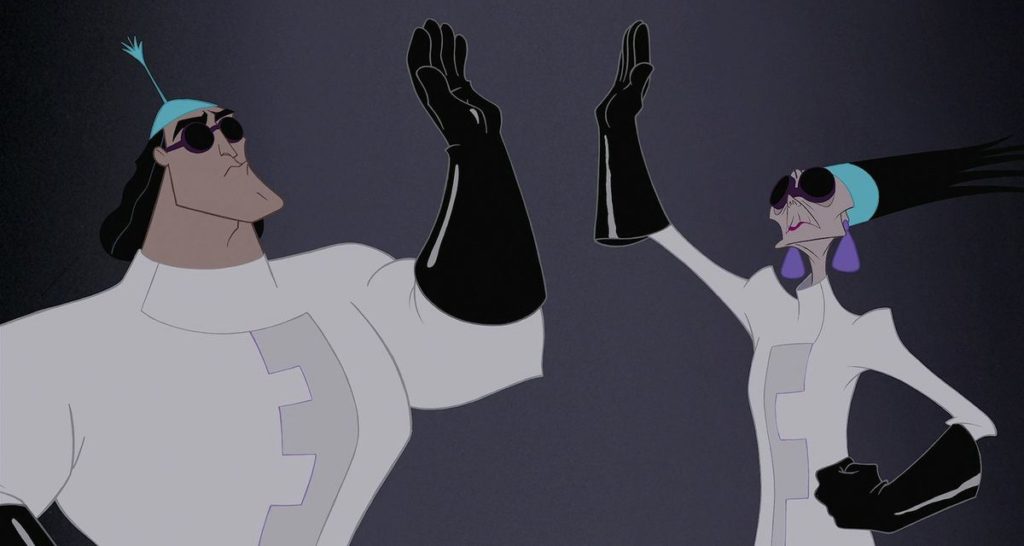 After Sting was brought on board to crank out the tunes, his wife, actor and director Trudie Styler, began to film the artists at work. In the early days of production, the film’s plot was very different: David Spade’s selfish emperor, then called Manco, swapped places with a doppelganger peasant played by Owen Wilson (wow). Eartha Kitt’s brilliant Yzma was a literal witch who, discovering the switch, turned Manco into a llama and threatened to reveal the truth about the peasant interloper unless her wish to summon the god of death to destroy the sun, to stop it aging her, was fulfilled. Whilst the pauper fell in love with Manco’s fiancée Nina, the llama-fied Manco fell for a llama-herder, who then teamed up to defeat Yzma. Simple… right? In comparison to what it became, it sounds insanely complex, especially when trying to fit Sting’s contributions within it, including the dance number “Walk the Llama Llama” and Yzma’s villain song “Snuff Out the Light”. That’s right, Yzma almost had a villain song. We were robbed.

So what killed it? Well, the sheer scale of the project meant that production was flagging. Its intended release date of summer 2000 seemed less and less likely and pressure from sponsors McDonald’s and Coca Cola to keep that date meant that a push back was out of the question. Allers was adamant that if he could just have more time he could save the film. The suits said no and Allers, exhausted and beaten, left the project he had spearheaded for four years in 1998. Production went into a tailspin. Disney gave producer Randy Fullmer two weeks to save the film or it would be canned. Creatives scrambled to salvage anything they could from the sinking ship. Every moment of this nail-biting process was captured by Trudie Styler and the documentary team. What started as a fun behind the scenes look at the making of another sure-fire Disney hit became an exposé of the brutal conditions the team was forced to work under, countless ideas shot down and weeks of work scrapped when an executive didn’t deem it worthy.

Finally, a way out surfaced. When the character of Pacha was expanded and redeveloped into an older family man, the studio decided to use a tried and tested formula: a buddy road movie. The expansive and complex plotline was slimmed down into a simpler tale of the Emperor (now named Kuzco after “Manko” was discovered to mean something naughty in Japanese) being turned into a llama, usurped by Yzma and forced to change his selfish ways on his way home. The addition of John Goodman as Pacha and Patrick Warburton as dim-witted sidekick Kronk helped to flesh out the story and create a much more overtly comedic film and thus, after six gruelling years and a title change, there was a light at the end of the tunnel. But what about Sting? Sadly, his contributions were mostly discarded, much to his chagrin. Every ember of a song idea was promptly stamped out when the plot changed for the umpteenth time but Disney was resolute in keeping him on board with the picture. In the final product, only two Sting songs remain: ‘My Funny Friend and Me’, a rather boring MOR blue-eyed soul track that rolls over the credits and the opening track ‘Perfect World’, a fun, up-tempo opening tune that Sting refused to sing claiming that he was too old for such a sprightly number. So Disney went with Tom Jones to sing it. Hmm.

Sting also took issue with the original ending – Kuzco, after seeing the error of his ways, was to spare the villagers’ homes but instead build his “Kuzco-topia” on another hill, destroying a rainforest in the process. Disgusted, Sting threatened to walk unless the ending was rewritten, and succeeded, with Kuzco now building a small shack near Pacha’s. If Sting wasn’t in the film in person, he was there in spirit. The Emperor’s New Groove eventually released in December 2000. Whilst underperforming at the box-office, the film found popularity upon its home video release and became a staple of every child’s VHS collection. In 2002, Trudie Styler debuted her documentary entitled The Sweatbox, after the nickname for the animation’s punishing reviewing process. Whilst Disney initially seemed fine with the doc existing, the lack of a public release sparked rumours that the House of Mouse weren’t happy with the final product and the documentary became the stuff of legend. Until, out of the blue in 2012, it was leaked in its entirety online by a UK animator, allowing the general public to finally see what went on behind the scenes. The Sweatbox today stands as a shocking reminder of the callous bureaucracy of film production and a testament to the tireless work of the animators and artists that, under unimaginable stress, create countless childhood memories. Boo-yah!

Wrong Lever: How The Emperor’s New Groove Was Almost The Next Lion King was last modified: December 13th, 2020 by George Howarth