With the upcoming release of Paramount’s new Teenage Mutant Ninja Turtles, the studio have commissioned artists from all over the world to produce their own interpretation of the turtles for an online exhibition, The Legend of Yokai. Have a look for yourself here.

We were lucky enough to catch up with two frankly amazing artists who were involved, Matthew Taylor and Sam Gibney. Without further ado, let’s dive in!

– So, how did you get involved?

Well, I received an email from Josh Lawson at Paramount, who said he’d come across my work with Mondo and at other places. He then asked if I wanted to create a new art work for the exhibition for the film. It was great. I was given no direction or restriction with a loose brief for the end product, which was ideal.

– How did you approach this job?

I have my own style so I don’t know how else to do it. All the same, I approach each job the same. Big or small, it’s the same way as I just hope for employment. It’s not difficult as I truly like what I do. It’s not about adapting my style to a property, it’s more about using the properties to match style. That’s the great thing about all the artists involved in this exhibition and the way it went about it. They had a broad scope of individuals and they simply said “Do what you normally do”.

– What was the motives behind your piece?

With the new movie, it was live action whereas I usually focus upon model; for example, my recent work with Jake from Adventure Time. However, the Teenage Mutant Ninja Turtles are anchored in reality, and reality was the key word. For my print, I focused upon the ninja element of the turtles, with an aesthetic to match a wood block print. I hadn’t actually seen the film so I had the briefest of looks at the film but that was a good thing. I deliberately wanted to separate the film and the piece. See, my piece takes place in a different setting, capturing a solitary, stoic Leonardo. I’ve always felt he was the one which best suits meditation and thought.

– Do you have personal connection with the Turtles? Did you grow up with them?

Oh yeah, I love Teenage Mutant Ninja Turtles. I read the comics from the 90s, and I think number one came in 1990, so I was hooked from the off. The first film came out when I was ten so I was the perfect market for it. I mean I liked the film/TV show but I loved the comics. The comics were a parody of gritty comics, with a clear distinctive style. So for me, this is sort of a dream project and when Paramount rang me, it was a definite yes!

– What’s it like being able to convert your passion (not just TMNT) into your profession?

It’s great. I love movies and there’s a clear cinematic aspect to everything I do. It’s not something I’m directly aiming for but when you do movie posters, people notice them, you end being asked to do more movie posters – which is not necessarily a bad thing.

I mean I’m now working at Mondo, and when you know, Mondo is an industry leader. The work and artists they have is just incredible. I just have to pinch myself all the time that I’m so lucky. 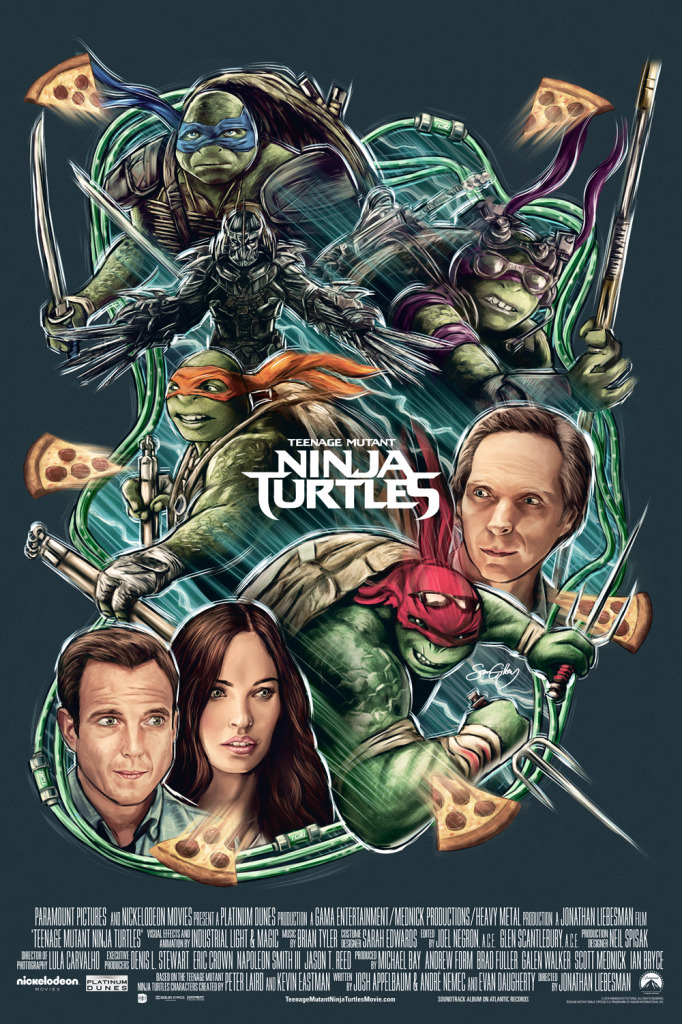 – So, how did you get involved with the Legend of Yokai?

It came directly from my work with Virgin Movies (Sam has produced several great infographics for them, you can see them here), and Paramount had seen some of those. I mean all of work seems to snowball from personal stuff. Whenever you work you have to fill it with stuff you like. So for example, I did some Shaun of the Dead artwork having interviewed Edgar Wright. So I send him the art work, and he really liked it and I’ve just done him a flyer. It’s awesome. You just have to do the things you love.

– Do you have a personal connection to the TMNT?

I think it began when I was 12 and I went to be local comic shop and I was just hooked on the comics. I ended up drawing the turtles when I was like, 12 or 13. They were just completely badass. There’s a mixture of Eastern stuff with the martial arts and weaponry, creating a mythic vibe to them but then they also eat pizza! I don’t even know if pizza was delivered in the UK then, so they just seemed extremely cool. They are basically a hybrid of great America movies, fast food and Eastern culture. So when I was asked to help out it was “Okay, wow”.

I’ve not read the comics for a while; I mean I read them back in the day but I was definitely up for the new challenge.

– How do you go about translating a major brand into your own style?

Paramount were very open to my work; they said from the off they liked it – so that was a great start. My work is very observational so I watched all of the trailers and TV spots for the new film, and began to compose what I was going to create in the back of my head. Through repeat watching, I was able to put it together, piece by piece. I mean it was fun experience throughout as I was being paid to do the thing I love.

My style is realism with comic influence. I’m not a fan of actual painting because if you make a mistakes that’s it. My paintings come through Photoshop as my artwork is not just a painting, it’s digital piece. This gives me so much more flexibility as you can actually undo mistakes, adjust the composition and have a much more playful dynamic. It means you can just try something on a whim and it can click, just like that. If not, it’s a simple undo. It’s just much better. That being said, any piece only comes to live in the last few hours!

Teenage Mutant Ninja Turtles is out in cinemas today (Friday 17th October). Thanks to Sam and Matthew for their time and Substance PR and Paramount for arranging this opportunity. The full Legend of Yokai gallery can be viewed here.