If there is one thing Paul Verhoeven knows how to do, it is create a huge action movie with bodies flying everywhere. If there is one thing Arnold Schwarzenegger knows how to do, it is be the person throwing the bodies. For a brief moment in the early ’90s, both director and leading-man had an opportunity to combine their destructive talents for what surely could have been the most fascinating medieval epic of the decade: Crusade.

With a script written by Walon Green (The Wild Bunch), Paul Verhoeven was initially in talks to direct protein-powered muse Arnold Schwarzenegger in Crusade from around the time of 1990’s Total Recall. The proposed cast included Jennifer Connelly, Gary Sinise and Charlton Heston alongside a reported budget of $100 million, promising to be a project depicting “entire civilisations out to destroy each other” (AICN.com) in classic Verhoeven fashion.

The action opens with peasant thief Hagen (Schwarzenegger) being sentenced to death for the illicit raiding of a corrupt clergyman’s goods. Having been thrown in jail just as the Pope himself arrives to drum up support for a Crusade to the Holy Land, Hagen escapes the noose by staging an apparent miracle. Realising, from the reaction of the awestruck peasant masses, Hagen’s value as a promotional tool, the bloodthirsty pontiff enlists the convict on Christendom’s quest for Middle Eastern domination.

Add to the mix the evil Count Emmich (Gary Sinise), who just so happens to be Hagen’s half-brother and is also intent on erasing his less Royal sibling from the family heraldry. Their first clash occurs in the Middle East before the unfortunate ex-prisoner is dragged into slavery and sold to Saracen Warriors. Whilst in the Holy Land he experiences his Road-to-Damascus moment (couldn’t resist), realising the Muslims in Jerusalem are a moderate people, keen to avert the onslaught of bellicose Christian invaders. It is here that Hagen also meets Leila (Jennifer Conelly), an alluring Saracen princess whom he tries to save from an uncertain fate as the city teeters on the brink of bloody devastation.

Standard blockbuster hack-and-slash fare then? Far from it. Verhoeven wanted the film to be controversial in tone from the outset, citing how “the story of the Crusades is the murderous attack of the Christians on the Arabs and the Jews.” It is clear the director didn’t want to lionise the Christian West as was standard practice in Hollywood up until this point. There was also talk of casting Charlton Heston as the scheming Pope Urban II, previously famous for his portrait of heroic Christian warrior El Cid in the 1961 medieval biopic of the same name. With an actor known as the stoic force for Christian good becoming the greedy fanatic at the head of the entire Church, we can be certain that Verhoeven was intent on presenting a fresh and exciting portrayal of medieval history.

The potentially subversive tone was also in keeping with the Dutch director’s previous work. We saw the inhumanity of corporate business as portrayed in Total Recall and the satirising of the American military as a conveyor belt of death in Starship Troopers. Crusade could have been Verhoeven’s condemnation of religious fanaticism and destructive diplomacy; something that would surely resonate with viewers even today. 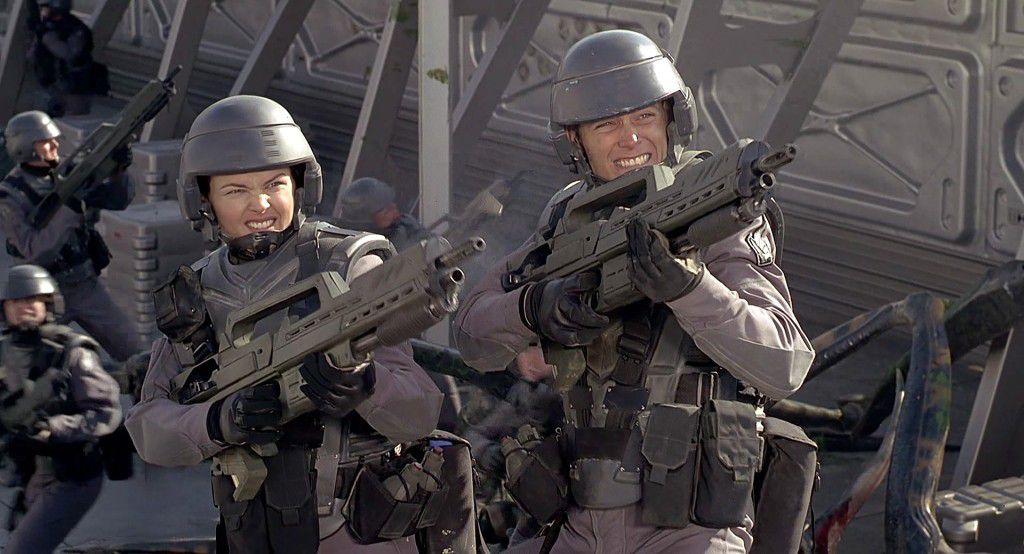 So what prevented it from happening? As with most big-budget productions… the budget. Passions ran high in the meeting stages with studio Carolco, as Schwarzenegger himself confirmed in an interview with Empire. He related how when asked what his guarantees were that costs would not spiral, Verhoeven screamed “guarantees don’t happen and if anyone promises you guarantees, they’re lying!” This attitude did not gel with Arnold who admitted “you can be a little bit selective about when to be honest.”

With little confidence that Verhoeven could prevent Crusade’s costs bloating to beyond $100 million, Carolco opted to fund the prospectively cheaper Renny Harlin-helmed Cutthroat Island. In a hilarious twist, Harlin’s proto-Sparrow pirate epic would go on to be the biggest movie flop of its time, costing $115 million and recouping a mere $10 million at the box office. It was the film that bankrupted Carolco six weeks before it even reached theatres. With tales of large sums of production money being spent on specially shipping crates of V8 juice to the shoot on Malta for the consumption of Harlin and his wife Geena Davis, it appears that Verhoeven would have been a much safer bet for the uncertain studio.

So was that the end of Crusade? Not necessarily. Rumours abounded that Arnie was still trying to get the project off the ground towards the end of the ’90s whilst an unchangeable Verhoeven suggests that he would need at least $200million if he were to attempt the picture today. David Hughes, author of Tales from Development Hell, still believes the project has life, albeit for a younger action star, saying “if Dwayne Johnson decided he wanted to make Crusade, he could probably get it made pretty much as written.” Having recently seen the former wrestler grace the screen as the mythical behemoth of Ancient Greece in Hercules, it is not impossible to imagine him as the sword-swinging Hagen fighting against fanatical masters.

Yet there is something satisfying about the idea of Verhoeven and Schwarzenegger tackling this project in the ’90s. Whether it be Verhoeven’s fondness for rubbery special effects as seen in Total Recall or the huge blood loss splattered all over Starship Troopers, the Dutchman was always a fan of blockbusting spectacle, something the script for Crusade was crying out for. Schwarzenegger was also in the midst of his muscular prime in the early ’90s, possessing more than enough charisma to play Hagen. Billed as part-Spartacus, part-Conan The Barbarian, Paul Verhoeven’s Crusade could have been the definitive opportunity for the Dutch director and Austrian strongman to deliver a medieval epic for the ages.