Everyone should see 1917. Whatever your film taste, whatever your interest in World War One films in particular, 1917 bridges the divide. Winner of Best Film and Best Director at the 2020 Baftas (among many, many other accolades), 1917 is Sam Mendes’ personal take on the Great War, a film that appeals to audiences as much as awards – it is the arty blockbuster, the contemplative and intimate action epic.

Inspired by stories told by Mendes’ grandfather, and co-written with Krysty Wilson-Cairns, 1917 follows two young British soldiers through the trenches, across No Man’s Land, and into occupied territory on a mission to save over 10,000 lives. “Follows” is very much the operative word; much has been made of 1917 being a ‘oner’, being conceived and crafted with the appearance of a continuous single shot over its near two-hour run time, and rightly so. The concept is so ingrained in every element of the production that, while viewers may never forget that they’re meant to be watching one-take, the effect adds substantially to the investment in both story and character. The device gives 1917 narrative simplicity through its own production complexity; the complexity of war is simplified in pinning the viewer to a single, unshifting point of view.

That’s not to say that the cinematography is austere; both the camerawork and the art it captures are astonishing. Long denied his Oscar, 1917 earned the legendary Roger Deakins his second little gold man (and his fifth Bafta). From the first to final shot it is clear why – 1917 holds in its frames some of the most striking and memorable images from 2020. From the snippets of tranquility juxtaposed with the carnage of war to the deep mud-caked trenches and ravaged civilisation, 1917’s camera finds beauty in the grim. The camera walks backward with viewers through trenches, swoops up and over the front line, sinks underwater, and cuts through barbed wire to give us a uniquely continuous yet varied perspective on the action and the moments of calm. Every part of the cinematography combines to emphasise the surreal nature of the journey and the unbelievable mission. The crowning achievement, however, comes by nightfall as a shelled, abandoned village comes alive in the moving shadows and bright lights of flares and fires to become the embodiment of the phrase ‘war is hell’. 1917’s score too is far from one-note. Thomas Newman’s music is as varied as the film’s look, and as out of time as the film’s timeless messaging about ordinary people overcoming adversity to do extraordinary things. Whether taking inspiration from classic war films or modern action thrillers, using a crescendo to build into silence, or moving from mystical fantasy epic to portraying the incongruity and strangeness of a war-torn world through ethereal, electric sounds, Thomas Newman once again highlights his impeccable ability. The use, to start the final act, of a sung storyteller (Jos Slovick) simultaneously lifts the spirits of the rested and welcomes the exhausted into a reverie, creates a singularly tender moment of reflection through the power of a lone voice.

The look and sound of 1917 capture exquisitely both scale and intimacy. From the costume design and utility, through the varied warren of trenches and underground tunnels, across the muddy quagmire of despair that is No Man’s Land, and between the seemingly peaceful wildflower meadows and hellish husks of villages, authenticity abounds in 1917. One drop, although maybe to be expected given the single point of view offered, is that the enemy is always just that. While the British, particularly the officers, are shown in shades of grey, 1917 does not present the notion of ‘the good German’. The British infantry are portrayed as honest, ordinary, and exceptionally young men, with their officers on a sliding scale between callous zealots and coldly decent depending on which side of the pessimist/realist divide they fall. Yet every interaction with an opposition party is antagonistic, even in the most shocking of circumstances and where opportunities are clearly available for a blind eye or a moment of shared humanity. 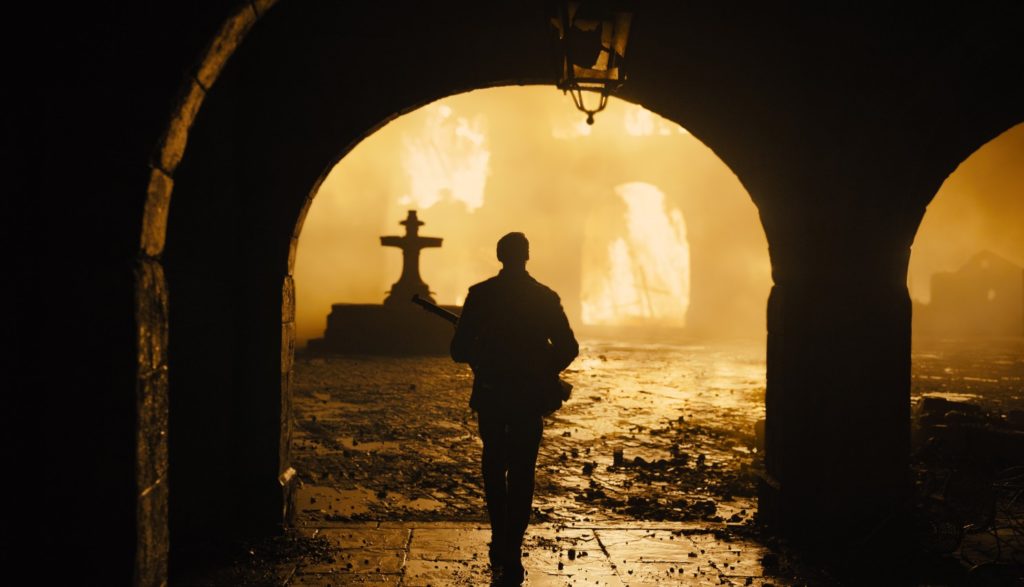 For all the excellence in the craft it took to produce a film with such intense look, sound and feel, 1917 still depends heavily on its actors. With a small ensemble, featuring a veritable who’s who of British acting greats keeping viewers moving along the lines with notable performances particularly from Andrew Scott and Mark Strong, the film is centred permanently on an exceptional performance from George MacKay. Always great, MacKay shines as Lance Corporal Schofield, a quiet, contained, competent young man aged beyond his years by his experiences at war. His moments of tenderness and generosity find their counterpoints in scenes of exertion and brutality, and as the ever present camera spends significant time locked on his face MacKay expertly sells the struggle to keep emotions in check and to press-on despite overwhelming difficulties.

War is, of course, bigger than any individual, but by finding this individual and holding him close against a stunning background and soundscape, Mendes has created a intensely personal and durable war film that will doubtless stand strong against the test of time.