For Your Consideration: Grown Ups 2

Grown Ups 2: the sequel that no one asked for. Or maybe they did? After all, Grown Ups grossed $162 million dollars in the USA despite being critically panned. Grown Ups 2 has followed in its predecessor’s footsteps, claiming an impressive 9 Razzie nominations, so it’s the obvious place to start my Razzie 2014 special. The plot is simple: Sandler, Spade, Rock and James get up to some shenanigans in their hometown. That’s literally it. So, money talks, and this is what it’s saying. I’ve got my earplugs ready.

00:00:57 – We open on good old Adam Sandler slumbering peacefully in his idyllic suburban home. Beside him, Salma Hay- wait, Salma Hayek is his wife? Set your plausibility to none.

00:01:40 – Sandler wakes to find a moose is loose in his house (I’m so sorry), something he hilariously compares to Hayek’s mother visiting from Mexico.

00:02:20 – I’m going to take a moment to pray that not every ‘joke’ is accompanied by every single character theatrically screaming. The moose rears up and urinates all over Sandler before rampaging through the house and doing the same to his showering son. Apparently it’s a deer, not a moose. What do you think this is, National Geographic? I’d edit my work, but then I can’t use my fantastic joke from earlier.

00:04:25 – I suspect this is the first of many times I’m going to feel very sorry for Salma Hayek today. The postman creepily points out that her bra is on the deer’s antlers and she looks scandalised in response. If you’re going to use her underwear as a terrible joke at least give her some lines! Oh and then Sandler high fives the postman. I thought I’d paused it at the degrading, misogynistic point in the scene.

00:05:40 – Wow. There’s some promising early characterisation here. Maria Bello, Kevin James’s wife, is letting their kids embarrass themselves in the name of confidence and self-expression. Then James burpsnarts, meaning he burps, sneezes and farts at the same time. High-concept stuff here folks. Hang on to your hats.

00:06:45 – Clichéd, but sometimes little kids saying grown-up stuff is actually really funny. Or maybe I’m just immature. Maya Rudolph forgets about her 20-year anniversary with Chris Rock and their 2-year-old son cuts in with , “Ohhh, dat’s cold.” Maybe you had to be there.

00:07:36 – James Spader has an adult son. He seems surprised to hear about this, despite being at the station TO MEET HIS ADULT SON. If you understand this scene, please explain it to me. Wait, this kid is meant to be 13? He looks like a cross between Alexander Skarsgård and Chris Hemsworth! 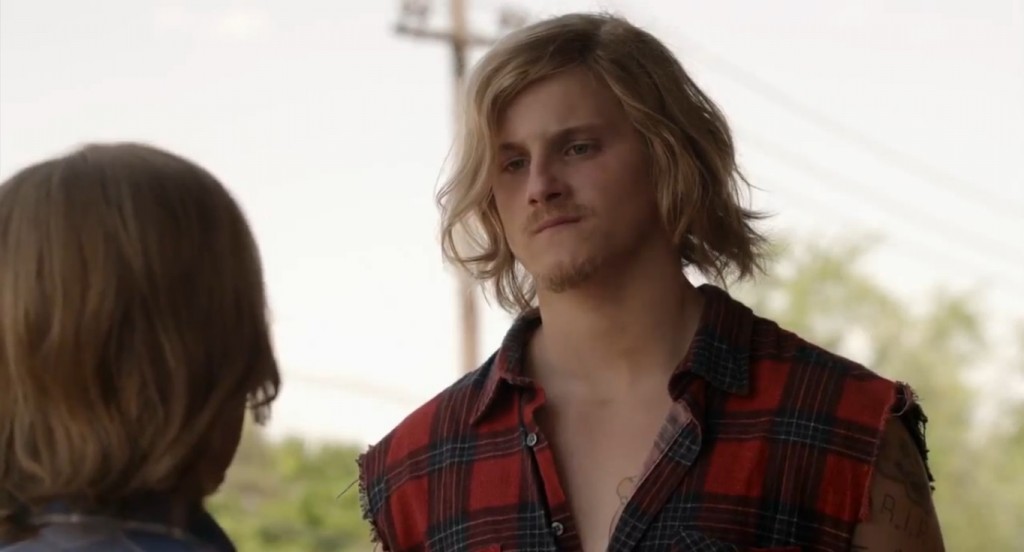 00:10:15 – Ahaha. Meta. Sandler references the fact that he’d only be with someone as hot as Salma Hayek in “a Hollywood movie or something”. Touché Mr Sandler. You win this time.

00:15:03 – You know what? You know what? This isn’t too bad. There have been a couple of chuckle-worthy lines in the last few minutes and the delivery has been solid – the least you’d expect from comics as experienced as Chris Rock and Adam Sandler.

00:19:32 – American comedy stalwart Jon Lovitz arrives to lead the women’s gym class, except he’s actually the janitor. LOL! He gets them all to shake their chests from side to side as an ‘exercise’, showing that he’s creepy, but also allowing the audience to get an eyeful. Double whammy. Clever writing there Sandler & Co. *Rolls eyes* He then gets bitten on the ass (Hi American readers!) by Rudolph and Rock’s son, so obviously justice has been served and the inclusion of that previous scene was totally fine.

P.S. This is the most tasteful screenshot I could find. Honest. 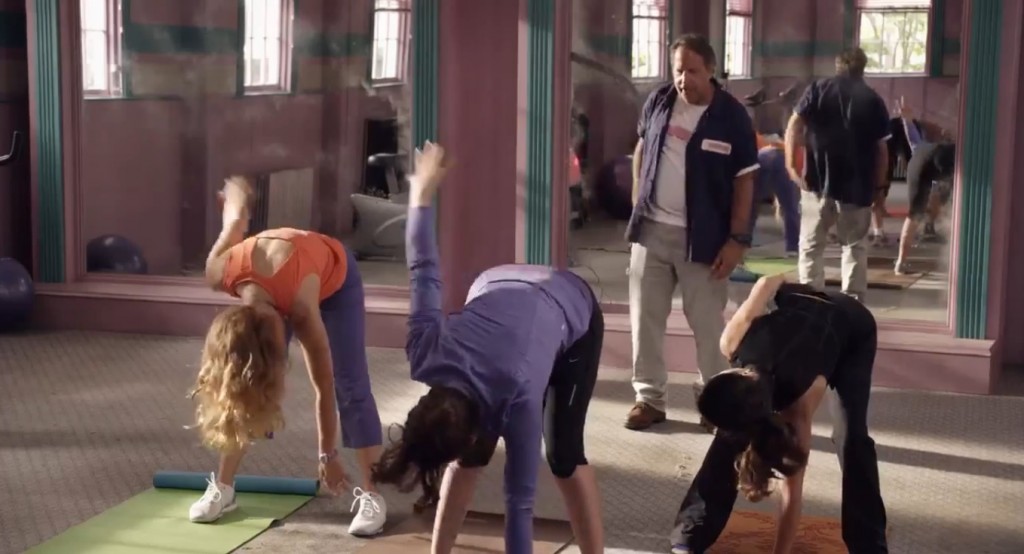 00:21:18 – The gym class lech over their new instructor, but it turns out he’s gay, prompting a chorus of boos from the class and a shout of “what a waste!” Charming.

00:22:30 – The gang meet Tim Meadows of Mean Girls and Walk Hard: The Dewey Cox Story fame in K-Mart and lo, the product placement does begin. His sole response to all of the gang’s jokes is to go “WHAAAAT?”, which is really hilarious and sophisticated.

00:25:31 – Ok, credit where credit’s due, that was pretty funny. The weird bus driver guy pulled the cord on an inflatable raft and got catapulted into the shelves. I know that sounds terrible, but it was done well, honest.

00:31:10 – The gang visit the kids’ ballet recital to stare down the teacher’s top as she bends over. When your comedy is based on the fact that men enjoy cleavage and women enjoy ballet you’re probably about ready to retire. Or star in an Adam Sandler film.

00:31:31 – We have a contender for worst joke of the day! The policeman wants to arrest the ballet teacher for “causing a disturbance of the peace. In my pants.” Just no.

00:35:10 – Another solid visual gag involving a chocolate ice-cream dispenser and someone standing above that dispenser with their legs apart. This film has been occasionally funny, but 90% of the jokes have involved bodily fluids or insulting someone and that gets tiring after a while.

00:38:42 – Two 17-year-old guys empty two bottles onto the ground because they’re “not ready for beer”?! This is by far the most implausible thing in the film, and that includes Hayek as Sandler’s wife.

00:39:20 – K-Mart also serve a delicious selection of food. Why not try our chicken chow mein?

00:42:20 – Taylor Lautner and his gang of college douchebags have arrived and are actually kind of enjoyably ridiculous. Plus it looks like Lautner does his own standing backflips, which is damn impressive.

00:44:10 – “I can’t believe nobody’s even scared of a black guy anymore! Damn you Obama!” Lines like this are good, but they’re not enough to save Chris Rock’s dignity. He’s better than this. The man’s a legendary stand-up comedian! This is almost as bad as Eddie Izzard’s appearance in the Avengers last time.

00:51:30 – A lot of time was wasted with David Spade inside a tire, but guess who’s showed up now? Steve Buscemi! Save me from the madness Steve!

00:54:18 – “Hey doctor, wouldn’t it be nice if there was a cure for anger?” – “There is. It’s called Jack Daniels.” See, they come up with the occasional zinger. It’s just a shame you have to sit through an hour of nearly plotless crudity to get there.

00:56:02 – There’s still about 40 minutes left and I have no idea what’s going to happen next. And not in a good way. I mean, there is so little plot that I couldn’t care less about what happens to any of the cast. I want to stop now please.

01:03:28 – Who thought that “WHAAAAAAAAT?” was an acceptable response to ANYTHING?

01:07:44 – I don’t understand why you want a baby with him either Salma. That’s the issue here, right? Because anything else would be insane. In all fairness, Hayek’s role is terribly written, but it’s also terribly performed.

01:15:54 – I’m not sure if Steve Buscemi dressed as Flavor Flav is the greatest thing ever or a reason to blind myself.

01:20:01 – I’m passing the time by trying to identify the ‘80s fancy dress outfits. I was born in 1991, but it’s still a lot more entertaining than whatever’s meant to be happening in the film.

01:30:30 – You’ve all heard of Chekhov’s gun; now we’ve got Sandler’s deer. It’s returned to maul Lautner’s groin in a scene obviously symbolic of the emasculation of today’s youth. Obviously.

That was terrible. At first I thought all the brutal reviews were being a bit harsh, but as the minutes ticked by and nothing interesting happened I was ready to give up. There were odd moments of humour, but only enough to justify a 5-minute short. A colossal waste of time and money.

Continuing my trawl through the Razzie 2014 Worst Picture nominees in the name of sarcastic journalism, next week I will be watching…After Earth. This feature has already covered the god-awful Movie 43 and Grown Ups 2, so the question is: can the Smith family’s big-budget home movie fare any worse? Check back next week to find out, and until then, don’t bother watching Grown Ups 2.